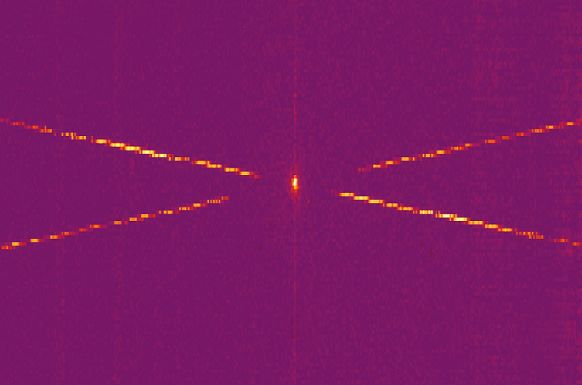 Explanation: A black hole is supposed to inexorably attract matter. But the intense radiation generated as material swirls and plunges into its high gravity field also heats up surrounding gas and drives it away. In fact, measurements made using this recent Chandra Observatory X-ray spectrum of active galaxy NGC 3783 reveal a wind of highly ionized atoms blowing away from the galaxy's suspected central black hole at a million miles per hour. Displayed in false color, the bright central spot is the X-ray image of NGC 3783 while the lines radiating away represent an X-ray spectrum of this source produced by Chandra's High Energy Transmission Grating (HETG). An X-ray spectrum is the analog to the rainbow spread of colors in a visible light spectrum. It represents a detailed, spread out image of X-ray colors or energies arising from the source. Ionized atoms of iron, magnesium, oxygen, nitrogen and other elements produce patterns of absorption at known X-ray energies. These patterns have been identified in the spectrum of NGC 3783 at slightly shifted energies and the measured shifts indicate the hot wind's velocity.