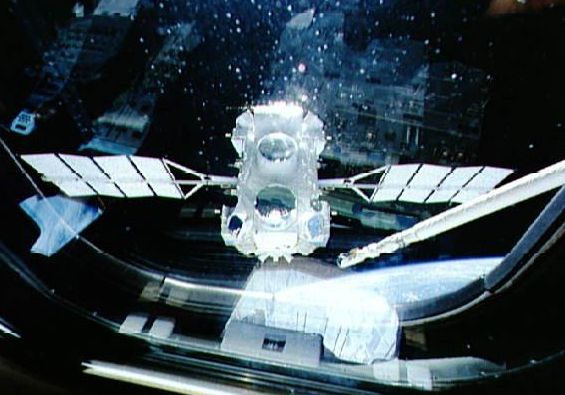 Explanation: Nine years ago the massive Compton Gamma Ray Observatory was deployed in low earth orbit. Sparkling interior reflections and the bright limb of the Earth are visible in this 1991 window view of Compton's release by the crew of the Space Shuttle Atlantis. Lofted above the protective atmosphere, Compton's instruments could explore the extreme high-energy Universe in gamma rays, photons with 100,000 times or more the energy of visible light. The premier gamma-ray observatory far exceeded expectations for a two- to five-year mission, but a recent gyroscope failure has prompted NASA to decide to steer the satellite safely back into the atmosphere. Compton's lasting legacy of discovery will include the detection of more than 400 celestial gamma-ray sources, 10 times more than were previously known; and more than 2,500 gamma-ray bursts.