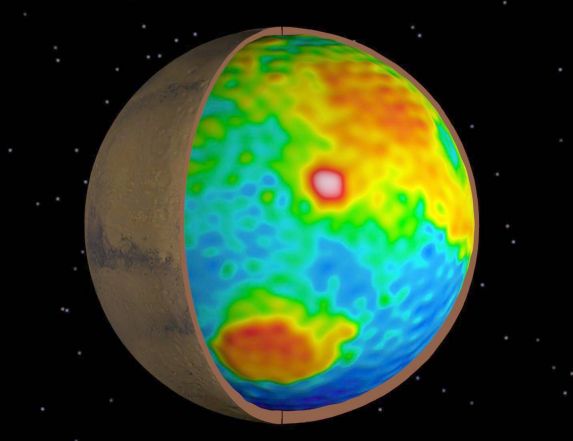 Explanation: What's inside Mars? From orbit, the Mars Global Surveyor (MGS) spacecraft has recorded detailed images of the red planet since July 1997. Still, its cameras can not look beneath the surface. But minute changes in the spacecraft's orbital velocity are produced by variations in the planet's gravitational field, and these changes are related to interior density fluctuations. When the subtle orbital changes were measured using MGS radio science experiments and combined with the accurate Mars Orbiter Laser Altimeter topographical data, researchers were able to produce a map of the thickness of the martian crust. In this color cut-away diagram of the results, red colors correspond to thin and blue to thick areas of the crust which rides above the martian mantle. From the global map, the crust is seen to range from about 20 to 50 miles thick and shows a dramatic difference between the generally thinner northern hemisphere to thicker southern hemisphere crust. For the newly formed planet, the thin crust would have promoted rapid cooling and may have given rise to a large northern ocean on early Mars.