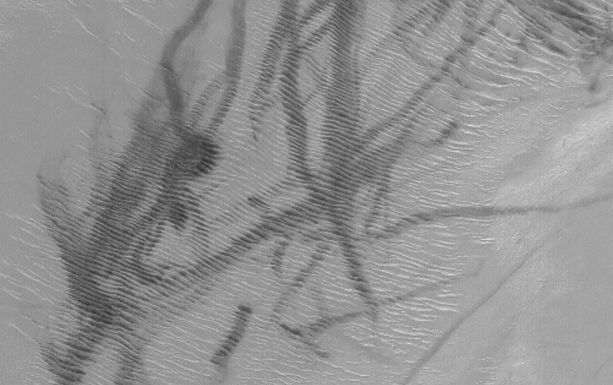 Explanation: Who's been marking up Mars? This portion of a recent high-resolution picture from the orbiting Mars Global Surveyor spacecraft shows twisting dark trails criss-crossing a relatively flat rippled region about 3 kilometers wide on the martian surface. Newly formed trails like these presented researchers with a tantalizing martian mystery but have now been identified as likely the work of miniature wind vortices known to occur on the red planet - martian dust devils. Another example of wind processes on an active Mars, dust devils had been detected passing near the Viking and Mars Pathfinder landers. Such spinning columns of rising air heated by the warm surface are common in dry and desert areas on planet Earth. Typically lasting only a few minutes, they becoming visible as they pick up loose dust. On Mars, dust devils can be up to 8 kilometers high and leave dark trails as they disturb the bright, reflective surface dust.