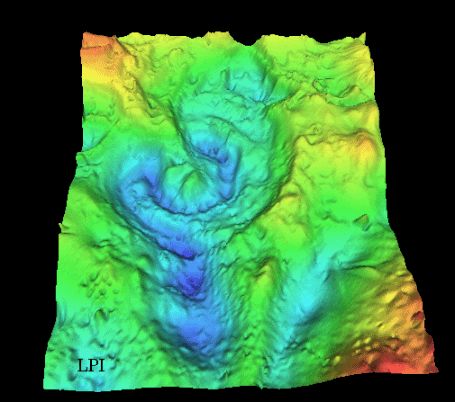 Explanation: What killed the dinosaurs? Their sudden disappearance 65 million years ago, along with about 70 percent of all species then living on Earth, is known as the K-T event (Cretaceous-Tertiary Mass Extinction event). Geologists and paleontologists often entertain the idea that a large asteroid or comet impacting the Earth was the culprit. In such a cosmic catastrophe, the good(!) news would be that the impact would generate firestorms, tidal waves, earthquakes, and hurricane winds. As for the bad news ... debris thrown into the atmosphere would have a serious global environmental consequences, creating extended periods of darkness, low temperatures, and acid rains - resulting in a planet-wide extinction event. In 1990, dramatic support for this theory came from cosmochemist Alan Hildebrand's revelation of a 65 million year old, 112 mile wide ring structure still detectable under layers of sediment in the Yucatan Peninsula region of Mexico. The outlines of the structure, called the Chicxulub crater (named for a local village), are visible in the above representation of gravity and magnetic field data from the region. In addition to having the right age, the crater is consistent with the impact of an asteroid of sufficient size (6 to 12 miles wide) to cause the global disruptions. Regardless of the true cause of the K-T event, it is fortunate that such impacts are presently believed to happen only about once every 100 million years!