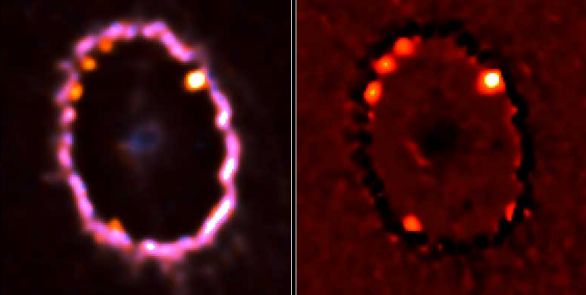 Explanation: In February of 1987, astronomers witnessed the brightest supernova of modern times - supernova 1987A in the Large Magellanic Cloud. Mysterious rings of material surrounding the expanding stellar debris were soon emitting a visible glow excited by intense light from the explosion. After fading over the intervening years, the interior ring has just been seen to sprout four new hotspots, as illustrated in these two versions of a Hubble Space Telescope image recorded on February 2nd. The abrupt appearance of the new features suggests that matter from the stellar blast wave itself has begun to slam into the ring in earnest, shock-heating the gas and producing the bright hotspots. The left-hand picture shows the glowing ring, initially excited by light from the explosion, along with the shocked hotspots. The right-hand picture has been further computer enhanced to emphasize the hotspots. The brightest spot at the right was first observed in 1997, while the four spots on the left half of the ring are new. Astronomers now eagerly anticipate a dramatic rejuvenation of the glowing ring as the bulk of the blast wave material, traveling at about 60 million kilometers per hour, continues to plow into it.