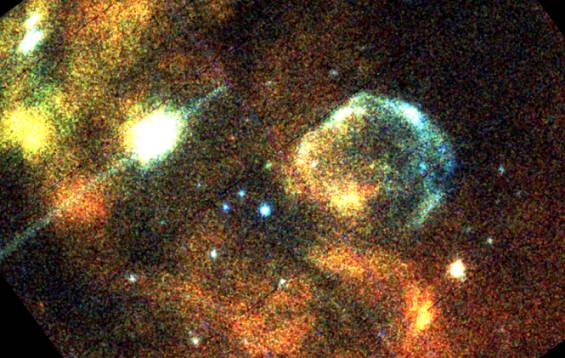 Explanation: Recently the European Space Agency released this and other spectacular "first light" pictures from its new orbiting x-ray observatory, christened XMM-Newton. A churning region of star birth and death in our small neighboring galaxy, the Large Magellanic Cloud (LMC), this field was one of several chosen to test out XMM-Newton's x-ray imaging capabilities. The picture is a false-colour one in which low energy x-rays are translated to red, medium energy to green, and high energy to blue. Image colours therefore represent the relative million degree temperatures of the x-ray emitting regions, red being the coolest and blue the hottest. Remains of the star that exploded as Supernova 1987a appear here as the white x-ray source at the lower right, while another supernova remnant, cataloged as N157D is the brightest source at the upper left. The bluish arc (near center) also appears to be a supernova remnant whose expanding debris cloud is interacting with the LMC's local interstellar gas.