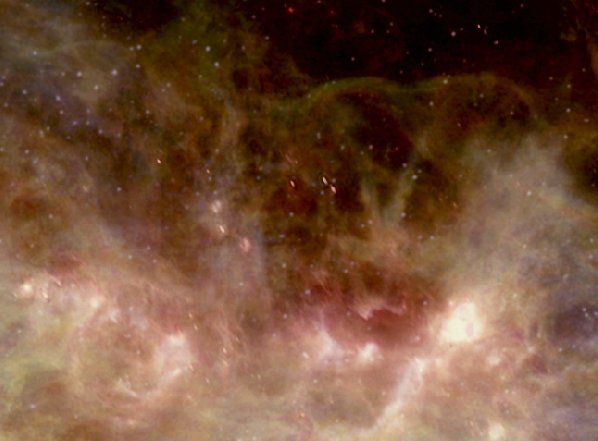 Explanation: A huge chimney venting hot clouds of gas out from the plane of our Milky Way Galaxy has recently been imaged in radio waves. The Canadian Galactic Plane Survey team used an array of radio telescopes to survey an ionized gas region known as W4. At the bottom of W4 and in the center of the above image is a very young open cluster of stars known as OCl 352. Research continues into how these stars created the W4 superbubble. Possible explanations include supernova explosions or strong stellar winds from these stars. It does appear clear, however, that hot gas is expanding outwards, being funneled by relatively cool and dense gas in a chimney-like fashion. The W4 chimney, which lies 6500 light-years from Earth and spans 250 light-years across, is visible as the comparatively dark area extending toward the top of the above image.