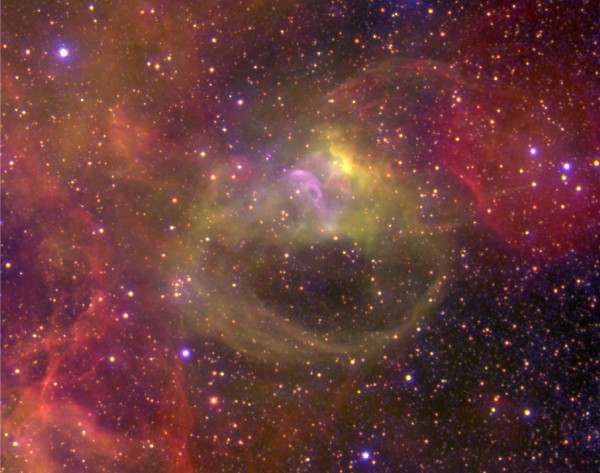 Explanation: Blossoming in nearby galaxy the Large Magellanic Cloud (LMC), this gorgeous nebula is energized by radiation and winds from a massive star whose surface temperature approaches 100,000 degrees. The composite color image from the European Southern Observatory's Melipal telescope resolves details in the energetic nebula, with emission from helium atoms in blue hues, oxygen atoms in green, and hydrogen atoms in red. While emission nebulae generally show the familiar red light from ionized hydrogen atoms - hydrogen atoms with their electrons stripped away - ionized helium atoms are tracers of even higher energy interactions. The intriguing filaments of helium emission make this and other recently studied emission nebulae most exceptional. A Wolf-Rayet star, the massive star powering this nebula, created a cosmic bubble with stellar winds in the early stages of its life. Part of the bubble is still apparent as the large arc in the lower portion of the image. The area pictured is about 150 light-years across.