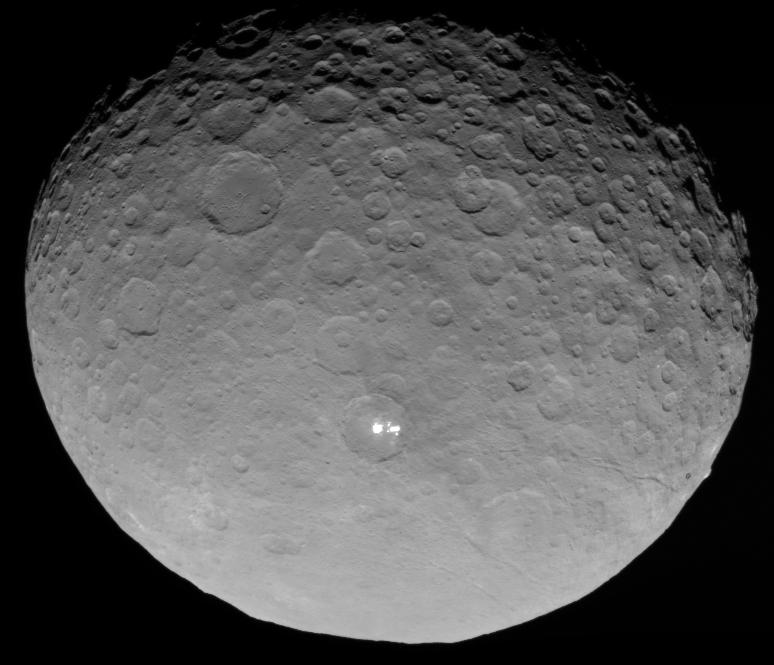 Explanation: Now at Ceres, Dawn's camera recorded this closer view of the dwarf planet's northern hemisphere and one of its mysterious bright spots on May 4. A sunlit portrait of a small, dark world about 950 kilometers in diameter, the image is part of a planned sequence taken from the solar-powered spacecraft's 15-day long RC3 mapping orbit at a distance of 13,600 kilometers (8,400 miles). The animated sequence shows Ceres' rotation, its north pole at the top of the frame. Imaged by Hubble in 2004 and then by Dawn as it approached Ceres in 2015, the bright spot itself is revealed to be made up of smaller spots of reflective material that could be exposed ice glinting in the sunlight. On Saturday, Dawn's ion propulsion system was turned on to spiral the spacecraft into a closer 4,350-kilometer orbit by June 6. Of course another unexplored dwarf planet, Pluto, is expecting the arrival of a visitor from Earth, the New Horizons spacecraft, by mid-July.