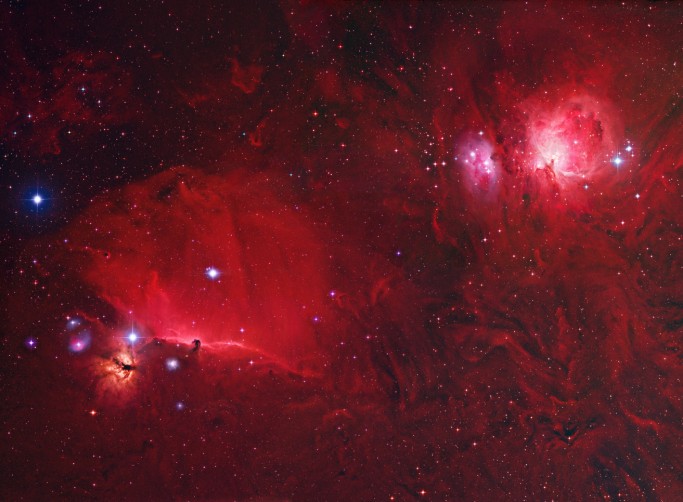 Explanation: Adrift 1,500 light-years away in one of the night sky's most recognizable constellations, the glowing Orion Nebula and the dark Horsehead Nebula are contrasting cosmic vistas. They both appear in this stunning composite digital image assembled from over 20 hours of data that includes exposures filtered to record emission from hydrogen atoms. The view reveals extensive nebulosities associated with the giant Orion Molecular Cloud complex, itself hundreds of light-years across. The magnificent emission region, the Orion Nebula (aka M42), lies at the upper right of the picture. Immediately to its left are a cluster of of prominent bluish reflection nebulae sometimes called the Running Man. The Horsehead nebula appears as a dark cloud, a small silhouette notched against the long red glow at the lower left. Alnitak is the easternmost star in Orion's belt and is seen as the brightest star to the left of the Horsehead. Below Alnitak is the Flame Nebula, with clouds of bright emission and dramatic dark dust lanes. Fainter tendrils of glowing hydrogen gas are easily traced throughout the region in this Orion deep field.