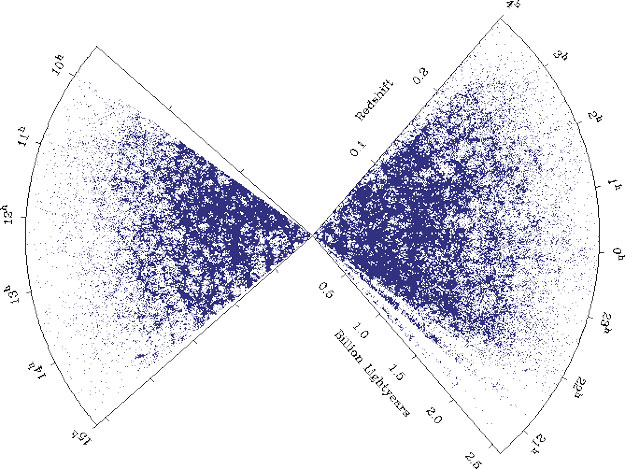 Explanation: How are galaxies distributed in the universe? This question is of more than aesthetic interest because the answer likely holds clues to composition of the universe itself. The above map shows the distribution of nearly 200,000 galaxies and is the latest answer obtained by one of the most complex astronomical instruments yet created: the Two-Degree Field (2dF) system. The 2dF system measures galaxy redshifts, allowing astronomers to estimate distances to some of the millions of galaxies visible, and hence to make a three-dimensional map of the local universe. Although the distribution of galaxies appears nearly uniform on the largest scale, waves of galaxies are discernable extending up to 100 million light-years. Detailed analyses of the incoming data indicate that to create such a network of waves, normal baryonic matter must make up only 15 percent of all matter, while all matter must make up only about 30 percent of that needed to make the universe geometrically flat. Is the remaining 70 percent dark energy?